DO NOT PLACE AN ORDER IF YOU ARE NOT READY TO MAKE PAYMENT. Dismiss 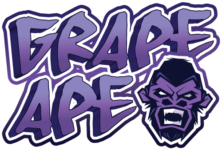 Grape Ape, propagated by Apothecary Genetics and Barney’s Farm, is a mostly Indica strain that crosses Mendocino Purps, Skunk, and Afghani. Named for its distinct grape-like smell, this Indica is known for providing carefree relaxation that can help soothe pain, stress, and anxiety. Its dense, compact buds are wreathed in deep purple leaves which darken as this Indica reaches full maturation following its 7 to 8-week flowering time.

The seed bank attributes Grape Ape to its founder Bret Bogue, who reportedly developed the strain sometime after starting Apothecary Genetics in 2004.

Indica is one of the most prevalent species of the Cannabaceae family. Think of it like a big, goofy giant whose favorite pastime is spooning on the couch while you guys listen to The Doors, even though you think The Doors are overrated, if you’re being completely honest.

In comparison with a sativa, its sprightlier sister species, indica strains generally pack a higher THC punch and sweetly lull you into a contented, relaxed, floaty-limbed state of being. Indica strains can be a powerful aid in combating sleeplessness, loss of appetite, pain, anxiety and depression, and are known for providing a bigger body high than other strains.

Baby Jeeter’s 5-pack of Grape Ape joints is the perfect choice for a convenient, potent, and personal cannabis experience. These mini-versions of Jeeter’s famous pre-rolls feature 0.5 grams of Grape Ape flower, infused with strain-specific distillate, and rolled in kief. Indulge in earthy grape flavors and uplift the mind with a blanket of euphoric giggles with a few tokes of a Baby Jeeter, then save the remaining four joints for your next smoke sesh.